The Optimus Black allows accessing an UART serial port through the USB connector, the dummy interface debug connector (only on P970 devices) or the MAX14526 MUIC pins.

Block diagram of the USB and UART connection, according to the Optimus Black (P970) service manual: 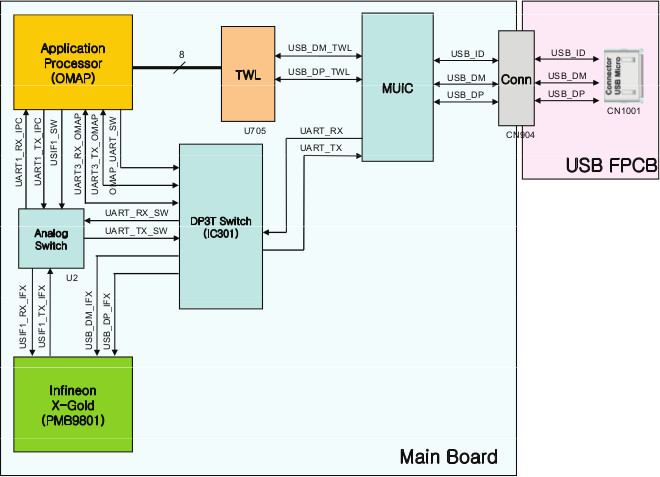 Note that there is no automatic software switching (yet) with U-Boot, so make sure that the FSUSB63 DP3T switch is switched to the main processor's UART and that the MAX14526 MUIC is switched to UART before connecting the UART receiver to the USB connector.

The dummy interface connector (found only on P970 devices) is likely a debug connector that was used by LG for bringing up the device. On production devices, there is no connector there and only pins are exposed. It is highly unrecommended to solder wires to those pins as their size and location make it very inconvenient to come up with a reliable setup.

According to the Optimus Black (P970) service manual: 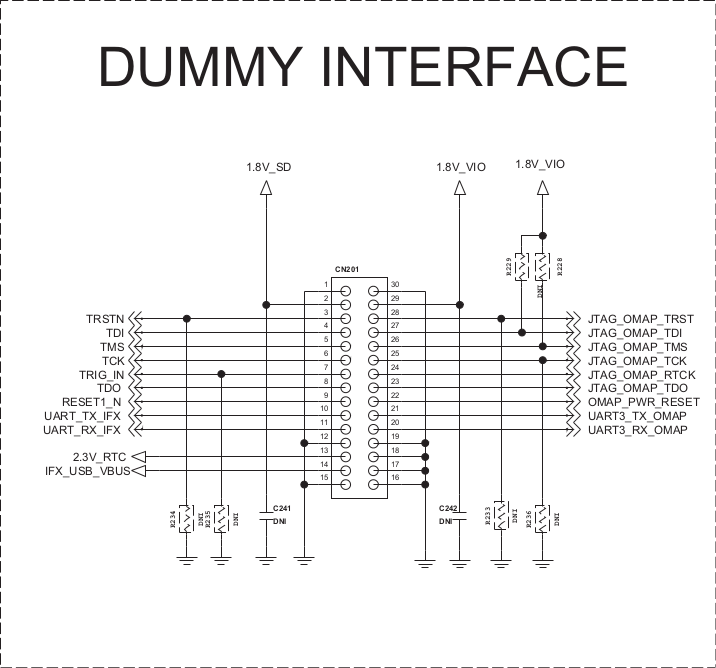 The pins are located on the board as shown: 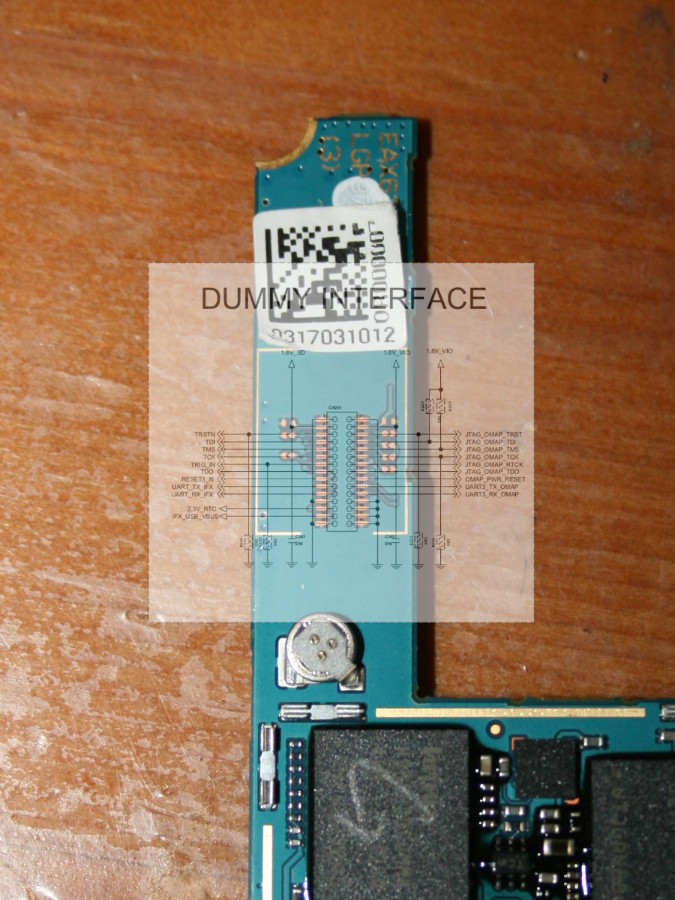 The FSUSB63 DP3T switch exposes the main processor's UART serial on its pins.

On P970 devices, the pins are placed as follows: 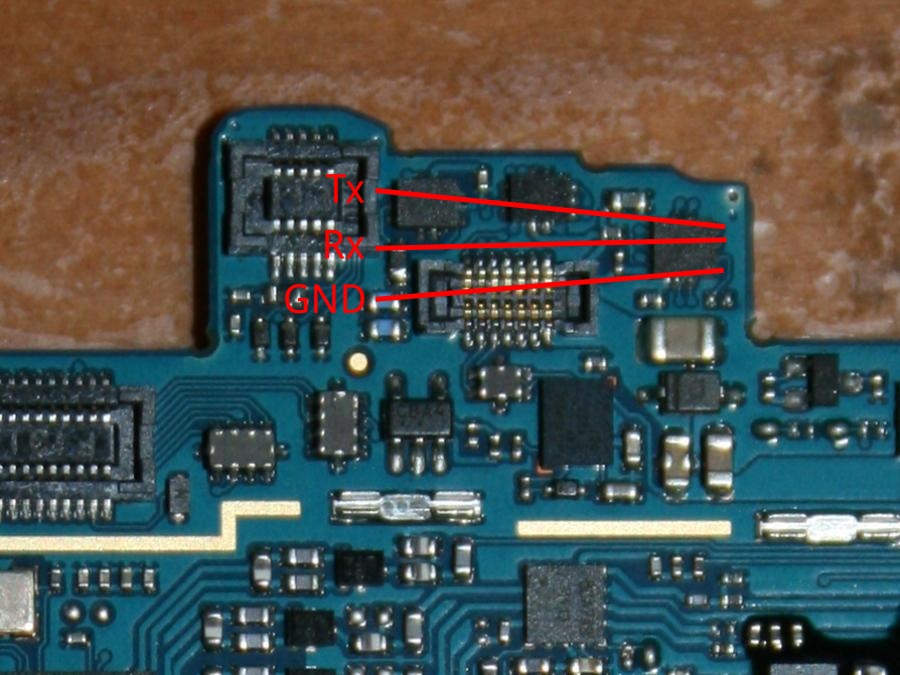 On KU5900 devices, the pins are placed as follows: 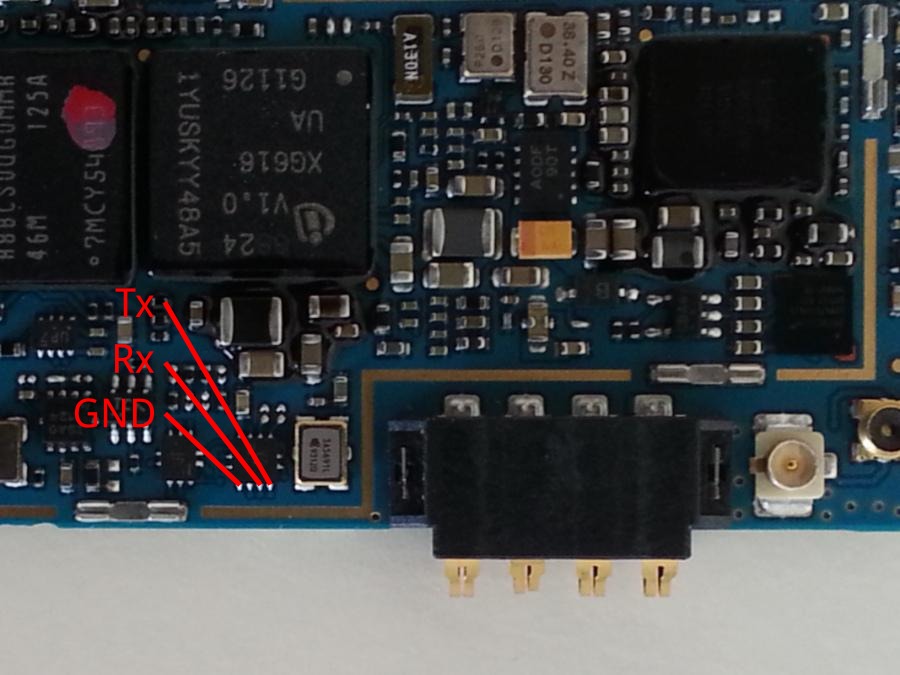 The main processor's debug UART is using a 1.8V logic level. Most UART adapters expect 3.3V, so a logic level shifter has to be used between the device and the adapter to convert between 1.8V and 3.3V.

Some development versions of U-Boot allow switching the USB connector to UART by pressing the G key (on the side) at boot.

LG's downstream version of U-Boot, that ships with Android version prior to 4.0, should allow switching the USB connector to UART by placing a 56 kOhm resistor between the ID and GND pins of the connector and pressing the volume down key at boot. LG's downstream version of LK, that ships with Android 4.0, may behave the same. This feature was not tested at this time.

LG's downstream version of Linux provides an interface for changing the USB connector muxing. It can be accessed through the /proc/driver/hmuic file.
ASCII values can be written to the file, using e.g. echo. Numerical values have the following meaning:

These documents are the propriety of LG Electronics and Texas Instruments and are not hosted by the Replicant project.
However, some excerpts from these documents are provided, for the purpose of providing technical evidence of the facts that are mentioned in this page. We believe that this particular use of the copyrighted work is fair use.

Updated by Paul Kocialkowski over 6 years ago · 25 revisions